An early mention of Chester can be found in the February 11, 1859 edition of the Hartford (CT) Daily Times. An Indian fight occurred near town – see the clipping. Also see ‘a history in postcards‘. 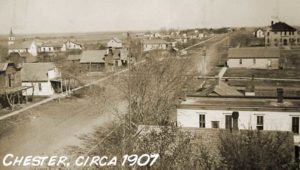 Chester was laid out by the Lincoln Land Company the 29th of July, 1880, on the land owned by H. Thompson, M. O. Croop and J. D. Kelley. It is located on the Republican Branch of the Burlington & Missouri Railroad, in the southern part of the county near the Kansas line, in the midst of some of the most picturesque land to the eye of a farmer that can be found in Nebraska. It is the most level portion of the county, but sufficiently undulating to have thorough drainage. Although but two years old, the town has a substantial trade and a population of about 245. There is great thrift and enterprise among the people, and the improvements in the business and residence portion of the town are characterized by neatness and solidity.

The school is graded and the school building just erected, at a cost of $2,500, is commodious and exceedingly neat in its appearance. The schools are in fine working order. This is greatly due to the patrons, as they take great interest in them. 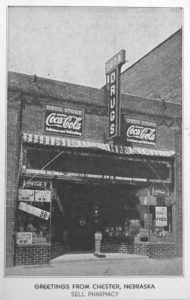 The town supports a first-class bank, established in October, 1880, by Thompson & Dinsmore. They do a good business in general banking and farm loans. They are old citizens, well known, and enjoy the confidence of the people.

The Methodists organized in October, 1881, with a small class, which has increased to twenty-four. Rev. M. J. Goodwin is their first pastor. They are contemplating the erection of a church building, but at present they worship in the schoolhouse.

The Christian Church was organized in December, 1881, and have at present twenty members. Judge George Lobingier, of Hebron, now fills their pulpit. They will shortly take steps toward building.

Chester is still growing rapidly and its prospects are exceeding bright. Being situated on what is expected to be the main line of the Burlington & Missouri Railroad, they will soon have the benefit of two great markets–the East and West.

CHARLES B. KYSER, of the firm of Gregg & Kyser, dealers in grain and stock, was born in Akron, N. Y., in September, 1850. He resided with his uncle, and was for some years engaged in company with him in dealing grain 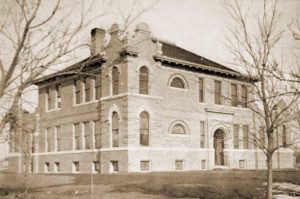 and live-stock. He subsequently learned the trade of practical tinner. In 1872, he went to Blue Rapids, Kan., where he followed his trade for two years. He then went to St. Joe, Mo., and was for a year or so employed as “commercial traveler” in hardware and stoves, and finally settled in Belvidere, Neb., in August, 1875, where he engaged in this business, in the firm of H. Gregg & Bros, remaining there some five years. He came to Chester in August, 1880, formed a partnership with Mason G. Gregg, of Fairbury, Neb., and built an elevator, which has a storage capacity of 12,000 bushels, and has since followed the grain and live-stock business at this point. The firm also opened a lumber yard at this place at that time, and carried it on until July, 1881, when they disposed of it to O. L. Brown.

JAMES WILSON, of the firm of Malowney and Wilson, dealers in hardware, furniture, implements, etc., was born in Scotland in 1849, and emigrated to America in 1853. He settled with his parents in Ontario, residing there some nine years, then in Houghton County, Mich., where he was employed by one firm for nine years as an engineer. Mr. Wilson came to Nebraska in March, 1878, located in Hebron, and joined J. J. Malowney in the implement business. In September, 1880, they opened a branch business at Chester, under the management of Mr. Wilson; here they also carried furniture, hardware, and tinware, and have a harness and shoemaking establishment, in which they employ practical men. Their stock at this point is worth about $13,000 or $14,000. In the spring of 1881, they opened a branch store at Hubbell, where they carry hardware and implements, and have now three establishments in Thayer County.

(above is taken from “Andreas’ History of the State of Nebraska“) 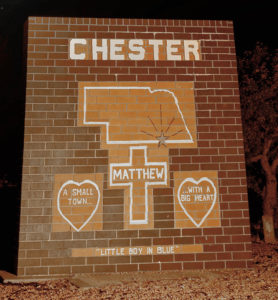 Because of a tragic incident on Christmas Eve 1985, the whole nation became aware of a village in Nebraska by the name of “Chester.” On that cold, snowy night, the body of a child, dressed only in blue pajamas, was found along the roadside. In the months that followed, authorities searched for clues that would lead them to learn his identity and to discover the circumstances that surrounded his death. In the early spring, while the name of the little boy was still unknown, he was laid to rest in the Chester cemetery. The concerned community of Chester turned out en masse to give him a dignified funeral, calling him “Matthew, gift of God.” Years later, when the entire sad story was revealed, his real name, Daniel Stutzman, was added to the stone. He will, perhaps, always be known as “Chester’s Little Boy Blue.”

The town of Chester was established when the Republican branch of the Burlington Railroad reached this area in the fall of 1880 and needed a station at this location. It was given the name “Chester” for Chester A. Arthur, 21st president of the United States. According to the records, there are 26 other towns in the United States with this name.

Platted by the Lincoln Land Company, the town was located “on the divide” between Rose Creek to the south and Dry Creek to the north, about three miles from each. Thus, while the early settlers had easy access to water, they did not have a problem with flooding as many towns did.

The original plat consisted of 15 blocks, nine on the north side of the railroad and six on the south side. When the town was new, lots sold for $25 each. Five passenger and several freight trains stopped at the depot daily. A Burlington turn-table was built at Chester for turning the engine on the Chester-Fairmont daily passenger train in 1906. G.E.Waring had a sale barn in the 1930s.

At present there is a bank, a hardware store, three construction companies, two auto repair shops, a cafe, beauty shops, elevators, farm chemical dealers, a truck stop, a motel, a painting and decorating service, a liquor store and lounge, a welding shop, an aerial spraying service, an auto sales, a post office, a medical clinic, a funeral parlor, a printing office, an antique shop, and an occasional freight train.

The Church of Christ, Methodist, and Lutheran churches were established in the 1880s. All are still active today.

During the summer of 1880, the first schoolhouse of the district was built in the northeast corner of town. After the village incorporated in 1883, a larger school was built on the present site. The addition of a large gym and several class rooms was completed in 1966.

Our town’s claim-to-fame was, and is, that Chester is where six-man football originated. When Stephen Epler was the high school coach in the early 1930s, he initiated the game which is still played by a number of the small high schools around the state as an interscholastic sport. Chester’s school is now known as “CHB” — Chester-Hubbell-Byron — as a result of consolidation with two neighboring towns. It now has an excellent sports complex located along Highway 81, near one of our two parks.

The highest population recorded for Chester was 634 in 1940. The current population is 360. Our highly-qualified rescue unit serves not only Chester, but also the Hubbell and Byron communities. The community has an active senior citizens center providing noon meals, meals on wheels, and monthly card parties.

Chester is located in Thayer County on the Nebraska-Kansas state line where Highways 81 and 8 intersect. This brings many tourists to our quiet, little village. Visitors stop to enjoy our spacious parks or shop in our friendly stores.

We would welcome a visit from you!

By Bernetha Gillette, Box 21, Chester, NE 68327, with the help of Zora Mae Messman and Frieda Truss.

One story in particular will be forever linked to Chester. The tale of the “Little Boy Blue” made national headlines and showed Chester to be the little town with the big heart.

While coaching at Chester High School in 1934, he invented the six-man football game that spread quickly across the country. Small schools took to it so they could continue to enjoy the sport. The rules called for three linemen and three backs. Everyone was eligible to receive passes.

At one time, some 2,000 schools played the six-man game. Life Magazine, Time, Readers Digest, Newsweek and other leading publications of the day gave significant coverage to his invention. The game continues to flourish to this day.

Reuben Schleifer
After a three and a half year stint in the army, Coach Schleifer came to Chester and never left. His entire 41-year coaching career was spent in that Thayer County community . He coached football and track for ten years with a record of 58-18 including on undefeated season in 1951. His coaching career in basketball spanned 30 years with a record of 455-167, which included 22 conference championships and a 24-0 State Champion season in 1953. He earned him a Milestone Level IV award from the Nebraska Coaches Association. Reuben has the highest winning percentage of any Level IV coach , with tenure at one school. Beside the athletic honors, Rueben is as justly proud of being selected ” Nebraska Outstanding Teacher” by Nebraska Wesleyan University in 1988.

Chester Nebraska
Mark your calendars! It's coming up quick! :D
Drive thru or delivery!
View on Facebook

Chester Nebraska
Check out the newest business in Chester!!!

Chester Nebraska
Sunday January 15th, Chester Community Dinner. Pasta Lunch at Chester United Methodist Church at noon. This event is open to the entire community, main course will be provided- please bring side, salad, dessert or just yourself. Free will offering and everyone is encouraged to attend. Thank you for supporting our community!

Chester Nebraska
This Sunday at Noon. :)

Chester Nebraska
Due to events beyond everyone's control, we are sorry to announce that Thursday's meal with Paradise Eats has been cancelled.